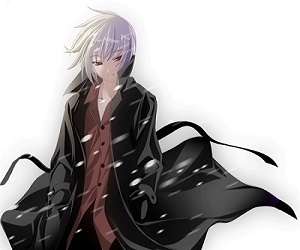 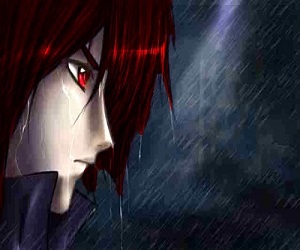 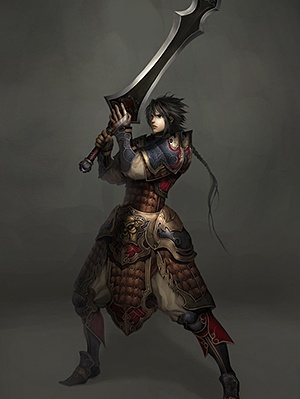 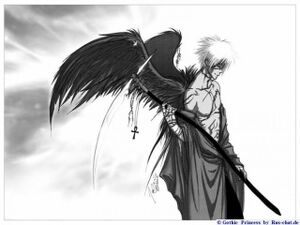 Hajime is a lazy man, who takes one day at a time and hated his real life so much that being in the game, not able to logout, was another chance to another life. He was stubborn and loudmouth to the point that many had found him annoying. When the SAO incident began, they wanted him away from them and floor boss strategy meetings. This led him to become a greedy solo player working only for himself, and mentally separated himself from society

He leveled up quickly, leading him to join back the front line, but this time he was just like his display name says, a Shadow. He now does his things, and almost never gets in other people's bussiness unless you pay him a descent amount of money or, a rare item. he won't help much other high level players. Shadow usually acts calm in battle, takng time to learn of his oponent's strengths and weaknesses before acting. Having mostly no friends, other's can't exploit that as a weakness, that is what he thinks, but if the few of them were in danger, he would jump in without thinking.

His mother died giving him birth, and his father had abandonned the pregnant mother when she was seven month in the process. Hajime has lived in an orphelina, till the age of six when he was adopted. First his parents looked like normal and nice parents, but for the next ten years he lived the worst things of his life. He was a slave, doing much more house chores than any other member of the family, they abused him phisicaly, mentaly, and even sexually when he became ten.

Out of the house he was becoming a deliquant, while school he never listened to teachers, fought with other people for no reasons. Hajime started taking drugs at the age of twelve and he also started doing major vandalism in town. Soon, the police cought him, and took him in. They decided to make follow him, make him have therapy with a psychologist. The year after he was taken out of that house and the family was arrested under any charges they did on him. Hajime then spent half a year in a reform school, and came out on his 13th birthday, where he was again adopted.

This time the family was a nice one. His life changed and he became a completely closed person, only going out to go to school, even skiped often. His only life was online, in MMORPG's. His low self estimate, was countered when he got on games and started being strong, getting reknown and becoming a top 15 in almost all MMORPG he played. To Hajime, it was important. He wasn't able to get close to people anymore and make friends, but online it was starting to change. People messaged him here and there to come trying a new game.

He went on with playing, and being the center of attention, good or bad, he liked it, he felt like someone for once. When he reached 15, the first VRMMORPG was coming out, and he would never have missed it. Hajime bought the game and log in with the other 10 000 SAO players who began the death game. Only diffirence is that to him, it was a chance for a better life.

Not much can be said on their relationship. Hajime is a reserved player, who deals with things alone, although, Sebas would be the person who knows him the most in all of Aincrad. Basstos became his kind of "personnal" blacksmith, and Hajime only visits him and no one else. Some says, it's trut that starts to get forged between them as a friendship grows. Hajime did sometimes, talk to basstos about his adventures, even sharing things, he wouldn't with anyone else. The blacksmith can be considered his only friend out there.

Hajime Started as a user of two handed straight sword, equipped with heavy armor. He used them a while, until no one partied him, and became a solo player. There he learned that monsters are quite fast, and switched to light metal, giving him more movent speed even if he wore a Two Handed Straight Sword. He fought day and night, wanting to become one of the strongest player and he may be one who has the more battle experiances. Being one of the lucky people, he inherited the Two handed Nodachi skill after using the Two handed straight sword till it reached at least 650. The skill is much like the Katana skill but for two handed users. Shadow focused a lot on sprint and acrobatics, making him deadly fast and accurate with his Nodachi.

Quick Draw (1-hit Strike) The player draws his weapon at a fast speed, while slashing a horizontal arc, capable of hitting multiple enemies.

Bushido Slice (1-hit strike) The player hurls at the enemy with quick feet movements, and holding his sword horizontally at hs shoulder lenght. He lowers his sword, when close to the enemy and slices it to the sides, passing through.

Heaven&Hell (2-hit combo) The first strike is a jump then downward slash, followed by a quick upward slash curving and changing direction to the left.

Haze-to-Weel (4-hit combo) The Nodachi is swung from down-left to up-right, going back to his down-right and slashing to his up-left, then goes back to his down-left and repeats the same pattern. It is all done in a quick motion, and the pattern looks just lke the infinite symbol. ∞

Effect: A sphere of darkness surrounds an enemy, and explodes on him, creating a shockwave damaging nearby enemies, by 1/4 of the initial damage.

Effect: The caster lauches five waves of darkness, damaging all the enemies it touches.

Effect: The aura of darkness dissipates from around the caster and creats a black mist, that curses all enemies, dropping their stats by half.

Effect: The more enemies there is, the stronger it gets. all the shadows in an area of 30 meters all around him, are drawn out an dturned into balls, then explodes into mini projectile, doing each their own damage.

Effect: Dark matter is one of the strongest dark magic known. It envelopes the caster in darkness, then drk lightning strikes the battle field in a range of 60 metters all around.

Effect: In terms of damage, this dark magic hits double the remaining hp of the caster. Though the penalty on stats is high when someone sacrifices themselves. the area of effect was buffed down to only 15 meters around the caster.

Retrieved from "https://saofanon.fandom.com/wiki/Hajime_Hiroki?oldid=35411"
Community content is available under CC-BY-SA unless otherwise noted.