Yuka Ichinose (いちのせ・ゆか, Ichinose Yuka), in-game name Astraea, is a player of End War Online. It was later revealed that her true surname is Takeuchi and she is the only child of Raiko and Ryuu. As a member of Etherion, she is assigned under the constellation Virgo, and the guild's current second-in-command.

Yuka has wavy blonde hair that reaches just past her shoulders, her bangs swept to the right. Her eyes are a vibrant shade of blue. Outside of her VRMMORPG, she usually wears a light pink sweater, with sleeves that almost go past her hands, and a denim skirt. She can also be seen wearing her school uniform on certain occasions. On her right ring finger is an infinity ring.

As Astraea, her avatar possesses a facial feature that is similar to hers. This time, her bangs are shorter and are usually covered by a red and gold headgear. Her hair are much longer and less wavy, having two thin braids held by red ribbons. Her eyes also retain their deep blue shade. Her clothing usually consists of the colors red, white and gold, along with metal knee-plates and footwear.

During her pre-adolescent years, Yuka had lived her life in London, with her mother's relatives, where she dyed her hair blonde. When she turned 14, they moved back to Japan due to both of her parents' work, which brought virtual-reality gaming very close to her heart.

She acquired the RiftGear as a birthday present for herself, together with End War Online.

Yuka bluntly admitted that the reason why she chose her faction to be Angels at first was because of the thought that Demons are too mainstream and Humans are too normal for her liking. But after experiencing the game firsthand, she quickly learned to love the race she had chosen.

Spoiler Alert! [show]
Astraea was chosen as member of Etherion and given a high position for a reason connected to her lore. According to legend, Astraea will one day come back to Earth, bringing with her the return of the Utopian Golden Age of which she was the ambassador.

Yuka is the type of person who never thinks before she acts, one thing Ryuu points out that she inherited from her mother, resulting in her appearing rash and cruel to others. But still, she is very cheerful and can easily get along with anyone, even with hard-to-approach people. Yuka adores greatly being praised and spoiled, as it pushes her to persevere even more.

She was also shown to care for the very few friends she has, and would, without a second thought, help any of them when she can, much like her father. Yuka is also an introvert, choosing machinery and technology rather than going out in the open, another similarity she shares with her parents. Her love and interest for tinkering is similar to the degree of her parents' love for programming.

Astraea has high respect for their guild leader, and looks up to him more than she does to anybody else. His serious demeanor often gets to her, making her appear like a reliable vice leader whenever the two of them are together, though it does slide every once in a while.

In addition to that, these two seem to share a closer bond in comparison to the rest of the members of their guild, even with Libra Justinus, Astraea's partner.

As an Angel, Astraea has high affinity for Soulcraft with the Light attribute. 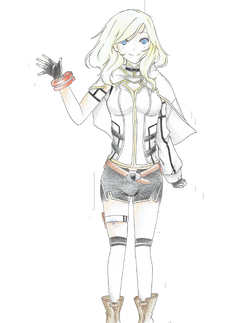 Retrieved from "https://saofanon.fandom.com/wiki/Astraea?oldid=42137"
Community content is available under CC-BY-SA unless otherwise noted.